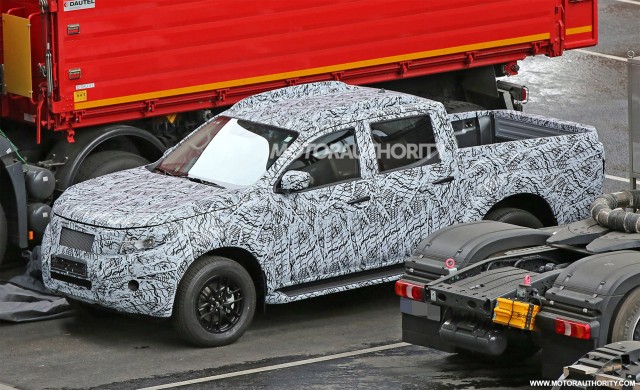 These are our first spy shots of a prototype for a new mid-size pickup truck from Mercedes-Benz.

The truck, which we’ve heard might be called a GLT or even an X-Class, won’t be some lifestyle offering.

Instead, it will be a serious workhorse with some typical Mercedes luxury thrown in.

It will be based on the rugged body-on-frame platform found in the latest Nissan NP300 Navara, and at the moment the prototype still shares some elements with the Nissan. Alliance partner Renault will get its own version, which the French automaker previewed last year with the Alaskan concept.

We’ve heard that a concept previewing the Mercedes version might be shown at this September’s 2016 Paris Auto Show. And a teaser sketch released at the original announcement of the truck in early 2015 already gives us a taste of what’s to come.

The trucks will be built at Nissan’s plant located in Barcelona, Spain, as well as a Renault plant in Cordoba, Argentina. Distinct styling and interiors will be used to differentiate them. 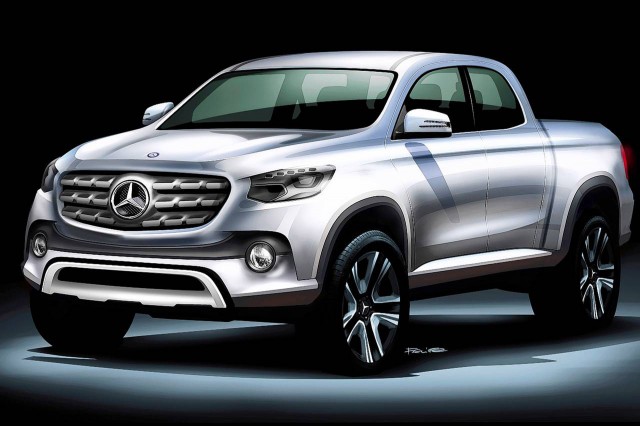 It’s possible Mercedes will also use its own engines for its truck with the likely options being 4- and 6-cylinder units, in both gasoline and diesel flavors.

Already a formidable force in the commercial van market, it looks like Mercedes is now ready to make its mark in the light truck segment. Potential rivals include the Ford Motor Company [NYSE:F] Ranger, Toyota Hilux and Volkswagen Amarok, plus the related models from Nissan and Renault.

We can expect a debut of the new Mercedes truck in its final form in late 2017 or early the following year. Unfortunately, there’s still no word on whether we’ll see it in the United States.

2022 BMW M3 Touring spy shots: Speedy wagon coming, but not to US