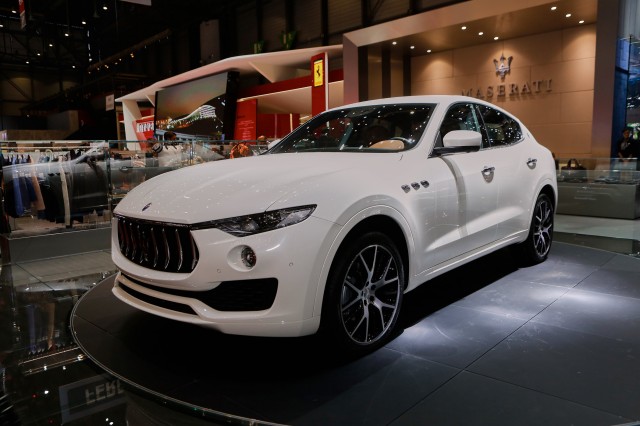 Maserati’s first-ever SUV will be shown in the U.S. for the first time at the New York International Auto Show later this month.

The long-awaited Maserati Levante arrived in production form at the Geneva Motor Show earlier this week, but it can trace its roots back more than a decade to a 2003 show car called the Kubang.

Since we already know what the Levante looks like, we anticipate that FCA-owned Maserati will use the stage in New York to detail American specifications. Early speculation suggests that we’ll get the 3.0-liter turbocharged V-6 rated at 344 horsepower in European form as the base engine, while the Levante S will use a retuned version of that motor cranking out 424 horsepower.

The turbodiesel V-6 offered in Europe probably won’t be offered here, although it’s worth noting that Maserati’s German rivals have seen some success from their turbodiesels.

All Levantes will utilize an 8-speed automatic gearbox that delivers power to each wheel via all-wheel drive.

The Levante is expected to go on sale here in the United States by the end of the calendar year. All Levantes will be assembled at FCA’s Mirafiori assembly plant in Turin, Italy.

Media days for the New York show are March 23 and 24, and the show opens to the public on March 25.

2021 Acura TLX doubles down on handling hardware ahead of debut